PulpCult presents “I Cast You Out!” – Available Now!

I CAST YOU OUT!
Stories of Possession

PulpCult’s debut collection of stories “I Cast You Out!” features 27 pieces of horror fiction by 27 authors from around the world.

I CAST YOU OUT! is available on Amazon worldwide

DARREN TODD
PLOT 264
Every time a young couple eats the produce from their newly purchased plot of land, they have deathly nightmares. What is the mystery of Plot 264?

N. A. BATTAGLIA
ELGIN’S DOOR
On his birthday, Elgin is bullied at school and unfairly suspended. His lust for Revenge prompts him to finally open the mysterious door that appears out of  nowhere in his room every night

KEITH HOERNER
M. DUSA
An act of rebellion turns into revelation in this short drabble inspired by the legend of Medusa from Greek mythology

CHAD MILLER
MISDIAGNOSED
Clarence is committed to a mental facility after his dark passenger “Billy” brutally attacks a supermarket clerk. Can the mental facility help Clarence, or is Billy something more than a personality disorder?

J. AGOMBAR
SIN EATER
After the cruel Charles Walker dies, a Sin Eater is brought in to absolve the dead man’s sins. Young Robert is fascinated by the Sin Eater but his curiosity soon turns to terror!

CHERYL OWEN-WILSON
NIGHT PEOPLE
Betsy’s sinister Aunt Martha Mae leaves her a large mirror and a necklace after her death. A great danger awaits Betsy in this tale from the bayous of southern Louisiana

JOSEPH J. DOWLING
MY FATHER’S HOUSE
When his father, and creator of an iconic 80’s computer game, dies in hospital, a man returns to his childhood home. Repressed memories are set to manifest in strange and terrifying ways

CATLYN LADD
ASHERAH
An ancient Goddess who protected her female devotees and was driven underground by the cult of Christianity, rises after 1500 years and immediately possesses the body of a 14-year-old teenage girl

EDWARD AHERN
SUCCUBUS
An entity possesses Brenda in order to blackmail respected arbitrator Theodore Dresden. Shall the entity succeed in stealing the free will of a righteous man?

SHERI WHITE
EXORCIST GIRL
An exorcism was done on Audrey when she was a teenager. Now, she can’t sleep thinking she committed a murder next door. Can Dr. Saal cure Audrey of her ‘disorder’?

MATT MCGEE
GRANDPA’S LITTLE ACRE
New wife, new house, new nightmare. Shortly after digging up a car from his land, Gramps keeps having the same nightmare where he is speeding into a wall!

JACOB STEVEN MOHR
THE PANIC
This fragmented narrative employing tropes of non-fiction, uncovers the chilling truth behind the mass drowning of beachgoers at Sanibel Island

MICHAEL GORE
THE VESTIGE
Madge & Bill have moved into a new house after their triplets are born. Is the house haunted or are the triplets trying to kill their mother?

C. BRANNON WATTS
NINE TENTHS
Robert and Anna’s new house is beautiful; not haunted. Sometimes, it is the homeowners who bring the haunting with them

KYLE TOUCHER
BILLY BEAUCHAMP, DISCOUNT EXORCIST
Experienced exorcist Billy Beauchamp is summoned by a dear friend for the strangest exorcism when he comes face to face with an old adversary

SARTHAK KAUL
THE WITCH AND HER LANDLORD
It took a while until Tim finally figured out that the woman he rented out a room to during the lockdown was, in fact, a witch!

COLIN LEONARD
THE DEVIL INSIDE
The wife and daughter of Jimmy Mahon believe that he is possessed. They call upon the parish father who finds a kitchen knife protruding from his chest

CHRISTOPHER T. DABROWSKI (Translation: Julia Mraczny)
THE PRISONER
A prisoner sewn into an unshaped tissue with mucus, gases and blood, pines for his eternal freedom in this short drabble

LAWRENCE DAGSTINE
TREVOR’S NAGGING
Dr. Eliot believes that Trevor’s is the true possession. He is adept at all languages of the Antichrist and possessing the grasp of all matters unearthly.

SHELDON WOODBURY
BONES IN A CITY GRAVEYARD
She came to New York City to be an actress, but the curse that has caused her failures has now relegated her to the ‘graveyard’ of the city

GINA EASTON
LITTLE CURSES
Harley believes that her little baby boy is a demon who only allows her to exist because she meets its demands. Where will Harley’s loathing & fear lead her?

RIE SHERIDAN ROSE
EVICTION NOTICE
The voices in Jason’s head have begun to take possession of his body. How far will he go to earn his freedom from the voices?

ROBB WHITE
A RAIN OF STONES
Chris returns home after learning that his parents have murdered his sister. What dark force has possessed Chris’ family?

PulpCult’s debut collection of stories “I Cast You Out!” features 27 pieces of horror fiction by 27 authors from around the world.

I CAST YOU OUT! is available on Amazon worldwide 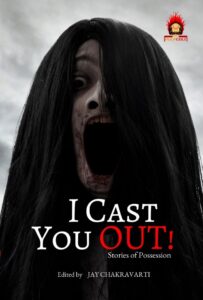